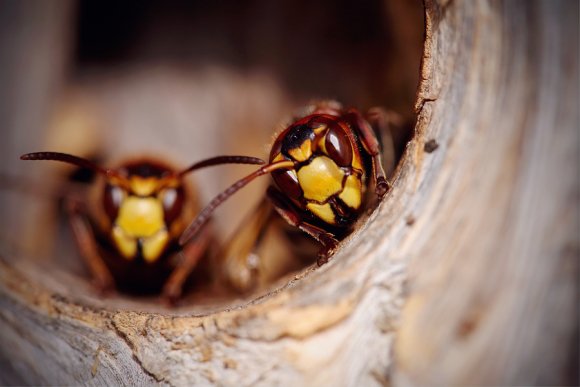 Have you spotted hornets around your home and are wondering if you need pest control services in Columbia? A type of insect frequently seen by pest management companies is the European hornet. Take a closer look at this pest:

Also called giant hornets, adult European hornet workers are about 25mm long and are yellow and brown in color. Queens can become as large as 35mm in length. These insects typically build their nests in cavities such as hollow trees or holes in walls, and at least 6 feet from the ground. The workers frequently forage at night and can cause damage to shrubs and trees while gathering materials for nest building.

Each fall, European hornet males seek out and mate with fertile females. The male and worker hornets die off by winter, but the fertilized females, who will be next year’s queens, hide during the cold weather and will later resurface in the spring. The queens establish nests to lay their eggs in after emerging from hibernation. By the fall, a nest can contain hundreds of hornets and can reach a maximum of around 1,000 workers.

The biggest indicator of a European hornet infestation around your home is if you spot the large worker insects buzzing around the area. The workers are often active at night. Watch for them in the evening so you can monitor their movement and track down the location of their nest. These hornets often build their nests in spots that are difficult to reach, and they are likely to defend it aggressively if it’s threatened. If you’ve found a nest inside of a wall, do not attempt to plug it; the hornets may chew through another area of the wall and can potentially create an entry into your home. If you’ve spotted a hornet nest on your property, it’s advisable to call a pest control company to deal with its extermination and removal.

While squirrels, raccoons, and other forms of wildlife are important parts of the natural ecosystem, these familiar creatures are unwelcome…

Bed bugs are among the most dreaded insects that can invade any home. When your home experiences a bed bug infestation, there is a high…