Identifying, Preventing, And Exterminating Squirrels And Other Rodents In Baltimore, MD

If you’ve been outside anywhere in Maryland recently, chances are you’ve seen a squirrel. Squirrels are one of the nation’s most abundant wild mammals. In fact, unlike most wild mammal populations, the world’s squirrel population has not decreased with growing development and urbanization. Squirrels are so adept at living alongside humans that they sometimes even use houses and commercial buildings as their own private residences. If you believe you may have an unwanted resident inside your walls, or an exorbitant squirrel population crowding your trees, it may be time to call a pest control professional. Here at All Star Pest Management, we offer comprehensive squirrel and rodent control services to homes and businesses in Columbia, MD, and the surrounding region. Learn more about squirrels below, and contact our team today! 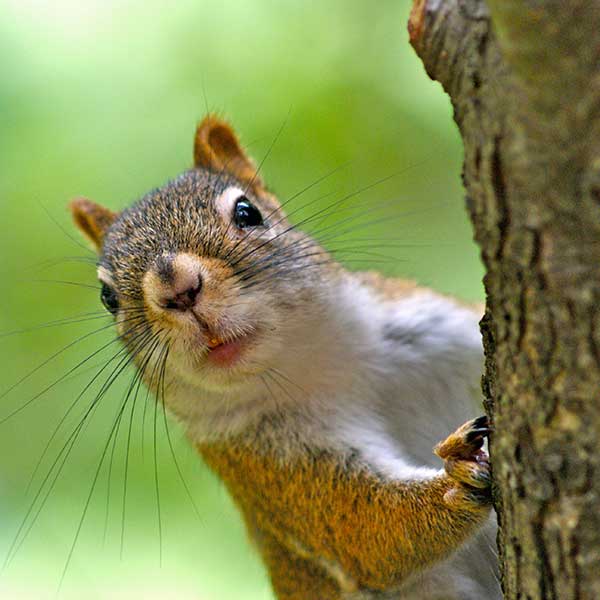 Squirrels are members of the family Sciuridae, a family that includes several small to medium-size rodents. Squirrels are typically arboreal, meaning they live and nest in trees, and are often distinguished by large, fluffy tails. There are 5 species of squirrels native to Maryland: the red squirrel, gray squirrel, southern flying squirrel, eastern fox squirrel, and the Delmarva fox squirrel. Squirrels are primarily herbivorous but have been known to eat a wide variety of human-produced food, allowing them to thrive in urban areas. Subsequently, squirrels have also been known to nest inside roofs, holes, and other spaces of homes and commercial buildings.

Abdou is the best! He was able to humanely trap and relocate a family of squirrels that had nested in our attic. He came back daily to check the traps and make sure the squirrels were gone before completely sealing up their entryway. We would use All-Star Pest Management again!

If you believe you have a squirrel or rodent infestation inside your building, the best thing you can do is use your ears. Often, scratching or squeaking noises heard inside indicate that a squirrel or other rodent has found itself into your walls. Other evidence of squirrel intruders includes new holes, signs of chewing, and other small damages in the structure of your building. If you happen to notice squirrels fighting in your area, it’s likely an indication that there are too many squirrels in a given outdoor zone, which can lead to squirrels seeking indoor habitation.

Preventing squirrel infestations on your property starts with ensuring that there are no holes, cracks, or other entry points into your roof or walls. Trimming tree branches away from your building will also discourage squirrels from climbing on top of your roof. Finally, it’s important to make sure that all potential food sources for squirrels on your property are properly guarded. We recommend getting a squirrel-proof bird feeder and guarding all vegetables with wire.

In addition to squirrels, there are a host of other rodents that cause trouble for homeowners and business owners in Columbia, MD and beyond. Other rodent pests include chipmunks. Also notable among these pests are mice and rats, which can contaminate food and water sources both indoors and outdoors. To learn more about prevention and pest control tips for mice and rats, click here.

Professional Squirrel and Rodent Control at All Star Pest Management

If you’ve discovered that you have an unwanted visitor living in your trees (or worse, your walls), contact our squirrel control experts at All Star Pest Management. We offer a wide range of fast and affordable squirrel control services designed to humanely trap and remove squirrels and other rodents from residential and commercial properties across Columbia, MD, and the surrounding region. Contact our team today!