Cicadas are insects classified in the order Hemiptera. Other insects in this order include aphids, leafhoppers, and shield bugs. Cicadas are best known for the songs they “sing.” The cicada sound is created by male cicadas flexing their tymbals, which are drum-like organs inside their abdomens. Adult cicadas are large, heavy, wedge-shaped insects. Unlike locusts, which cicadas are often mistaken for, cicadas do not consume vegetation. Instead, cicadas will drink sap from tree roots, twigs, and branches. 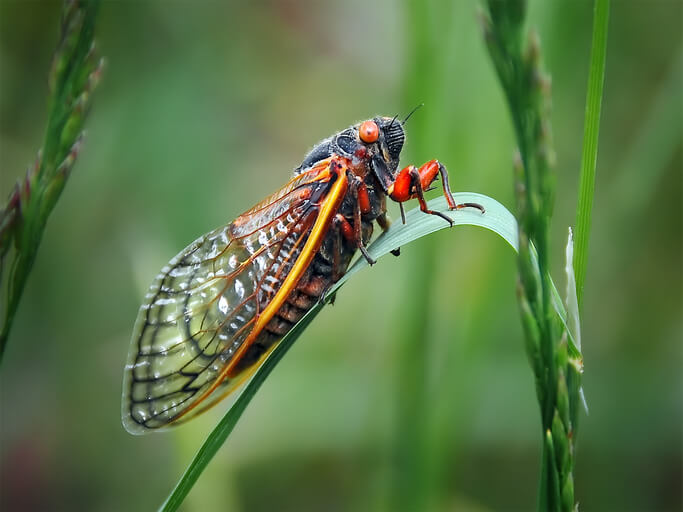 What Are Periodical Cicadas?

Periodical cicadas, also referred to as 17-year cicadas, appear at 17-year intervals. One of the primary differences between periodic cicadas and annual cicadas is the duration of time they spend as beneath the earth in their second stage of life, referred to as the nymph stage. While annual cicadas spend around two years feeding underground with adults emerging once a year to mate, a periodical cicada will spend 17 years eating and growing beneath the ground before ever emerging.

Eggs
The female adult cicada lays eggs on trees and shrubs by inserting the eggs into the small twigs at the branches’ outer end. Eggs hatch in about 40-60 days and become nymphs.

Nymphs
Nymphs drop to the ground and burrow about one to two feet into the soil, where they feed on the fluids found in tree roots, twigs, and branches. Mature nymphs emerge from the soil, climb onto surrounding trees or shrubs, and mature into adults. Soil temperatures of 64 degrees Fahrenheit trigger the emergence of the nymphs. This emergence will typically occur in the springtime. However, the length of time it takes for the nymphs to mature depends on the cicada species – annual or periodical.

Adults
Adults live for about 14-50 days, during which time they mate, lay eggs, and die.

Predators
One of the most impressive cicada predators is the cicada killer wasp. This burrowing insect looks like a massive yellow jacket. During the year that adult cicadas are active, cicada killer wasps are often seen either carrying or burying a cicada paralyzed by the wasp’s sting.

Cicadas will create a high-pitched buzzing sound as a way to communicate, reproduce, and even defend themselves. Best known for the songs they “sing,” male cicadas will flex their tymbals, which are drum-like organs inside their abdomens, to produce this signature noise. The cicada sound can be heard up to a half-mile away and can reach 90 decibels, making them the country’s loudest insect.

Unlike the annual cicadas, typically green, periodical cicadas are black from above and orange underneath. They have bright red eyes, red legs, and transparent, membranous wings with black veins. They are about ¾ to 1 ¼ inch long and have a three-inch wingspan.

Can Cicadas Hurt You?

No, a cicada cannot hurt you. Cicadas, while a noise nuisance, do not harm humans or pets. They don’t bite, they don’t sting, and they are not venomous. 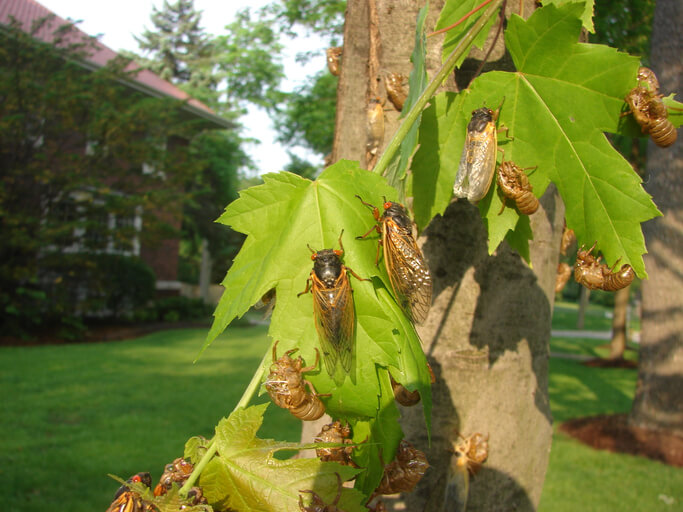 Why Does It Take 17 years For Periodical Cicadas To Emerge?

Of the 3,000 species of cicada bugs, less than 10 species have life cycles permitting them to emerge from the ground once every 17 years. Scientists speculate that these species, known as periodical cicadas, have extended life cycles to ensure predators cannot specialize in eating them and to avoid syncing up with their predators’ population booms.

When & Where Will Cicadas Emerge In Maryland?

Typically beginning in May and ending in late June, the periodical cicadas will start to emerge approximately when the soil eight inches beneath the ground reaches 64 degrees Fahrenheit. A nice, warm rain will often trigger an emergence. In 2004, people began reporting emergencies around May 13th, but if the weather is warmer, the cicadas could emerge in late April.

Periodical Cicada Brood X (10) will emerge in the spring of 2021 in Delaware, Georgia, Illinois, Indiana, Kentucky, Maryland, Michigan, North Carolina, New Jersey, New York, Ohio, Pennsylvania, Tennessee, Virginia, West Virginia, and Washington D.C. Periodical cicadas are unique in that most members of the population emerge in one year and then are absent in the intervening years.

While cicadas do not eat leaves, they may harm some plants when they lay their eggs. Typically homeowners only have problems with cast-off cicada skins, which pile up in yards and on patios. However, large swarms of cicadas can overwhelm and damage trees by feeding and laying eggs in them. This is primarily true for younger trees. We suggest that homeowners avoid using insecticides since cicadas will come to your plants from locations outside your property in such large numbers that spraying is of little benefit. Some practical, non-chemical methods of cicada treatment include: