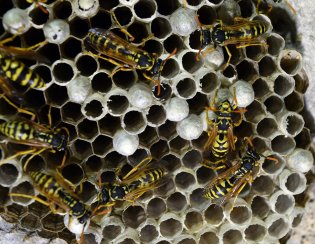 If you spot signs of a stinging insect hive, nest, or colony, you should seek professional extermination and pest management near Ellicott City. Without pest control measures such as insect repellant and insecticides, stinging insects can cause structural damage to your home, as well as compromise the health and safety of your family and pets. Here is a look at the most common types of stinging insects in Maryland.

Social wasps, such as paper wasps and mud daubers, are very common throughout Maryland. They build gray, paper nests that look like a honeycomb, and typically nest in eaves, under windows and awnings, within hedges and bushes, or inside structures. Yellow jackets are another very common wasp found around Maryland. They also build gray, paper nests, but theirs are typically built out of sight. Yellow jacket nests are highly populated, and they sting humans and pets more often than other stinging insects. Without extermination, fumigation, and removal by a pest control service, wasp nests will eventually damage the structure of your home. Your risk of stings and allergic reactions also significantly increases.

There is only one species of hornet in Maryland: the European hornet. This hornet is large, and yellow and brown in color. It builds very fragile, tan-colored paper nests in concealed places, including hollow trees, eaves, and buildings. They hunt yellow jackets, bees, and other insects at night, and are attracted to porch lights. Hornets also attack plants and trees like ash and lilac, destroying the bark and twigs. An exterminator can eliminate a hornet infestation using fumigation or insecticide.

Honeybees, carpenter bees, and bumblebees are all common in Maryland. Honeybees are social and build large nests and colonies in trees, walls, and hollow spaces in buildings. They will sting in self-defense, or in defense of their nest. Bumblebees build small nests on the ground that are very hard to detect. They only sting if the nest is disturbed. Carpenter bees lay eggs inside holes that they bore into wood, and the only sting if handled.

Is there anything more annoying than fruit flies? While they’re not harmful, they are irritating, because they have no regard for personal space.…

No matter how hard we try to keep our homes safe, clean, and secure, it happens to everyone from time to time: pests show up. Maybe you encounter a…